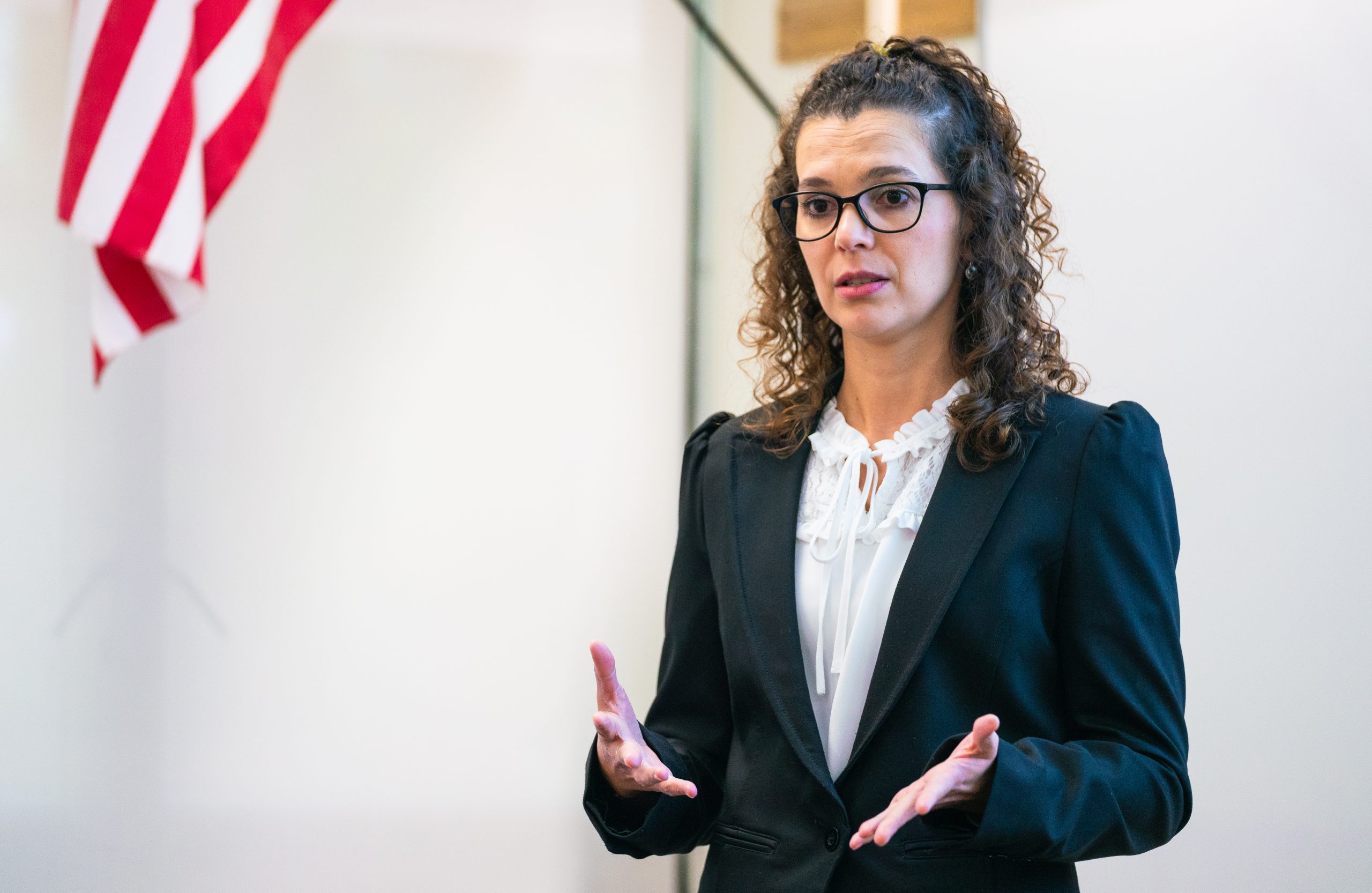 CJC Advertising Assistant Professor Juliana Fernandes was interviewed on Oct. 26, 2020 about her research on the impact of negative and persuasive messaging on political campaigns.

Your research focuses on the use and effects of negative information and persuasive communication messages, and how social and traditional media are used as a strategic tool during political campaigns. How did you become interested in these topics?

Fernandes: Well, since very early, since I was a child, probably seven, eight years old, my mom was always very involved in politics in my community back in Brazil. She ran for local offices there. So I always had that energy of election day and going campaigning with her.

I grew up with this idea of being involved in politics and community, so I guess that played a huge role on me trying to understand how politics work, how election works.  So when I came to the United States for my master’s and Ph.D. degrees at the University of Florida, I met my advisor, Dr. Lynda Lee Kaid. And she was the leading scholar in negative political advertising and political communication at that time.

That’s when I really found my niche in studying negative political ads. I always thought that being involved in politics with my mom early on, always fascinated me. And I always had a curiosity about understanding how negative information worked.

I imagine the past four years has been a treasure trove of information for you to study. Have you seen any differences in how campaigns have used negative information from the last presidential election to this election?

Fernandes: I think the main difference has been the fact that we had a very unconventional candidate in 2016 compared to previous years. So, President Trump has changed the status quo of how politicians actually communicate with voters.

There is research out there that investigates how candidates actually communicate with voters via Facebook, Twitter, social media in general. But Trump, particularly, changed the way that candidates communicate with voters. He does his own tweeting. He retweets things that might be extremely controversial and that might lead to more discussions. And sometimes, it could be considered disinformation.

So is the use of negative information or persuasion inherently a bad thing for our political process?

If you look at the evolutionary perspective of this, too, humans are also wired to pay attention to serious threats in their environment. We react to that more strongly than if something positive is going on.

So I have found that negative information is quite useful to people in general, to voters, to consumers. Because it might alert you to take action. You react to that. And that can, of course, lead to more informed decisions.

How do you define negative information, particularly if it can be used in a positive way or an effective way?

Fernandes: Well, with negative information in political advertisements, there is the issue section and there’s the image section.

Tons of research in negative political advertising have shown that ads that actually focus on belittling a candidates image, so anything related to how the candidate looks or his character, actually are the ones that are the least beneficial to candidates. But then when you are talking about the other candidate in terms of issues, that’s more acceptable for voters.

I actually have done a study on the effect of repetition of negative political advertisement. And in one study, I showed these ads repeatedly in very short periods of time. The results that I got were the traditional repetition effects results, where it goes up and then goes down, like an inverted U curve. They like the candidate, and then when it reached a certain point, it goes down. And then it’s not good for the candidate.

Then in another study, I spread out these repetitions. And when you do that, when you repeat, but you create this amount of time that people have more time to process the information and learn a little bit more, the evaluations of the candidate actually increased. So it was much more favorable to them.

So I have been working with my colleagues from the [Wertheim] College of Engineering trying to understand how to identify and detect influence cues in online text. We’re using the Russian ads from the 2016 campaigns that the Mueller report said had influenced our election in 2016. We’re using that, among the other types of text, to try to build a tool that can alert internet users and social media users of the degree of influence of that piece of text. We believe that this can be a very powerful tool, that will empower consumers, internet users, to really pinpoint if a piece of text is trying to influence them or not.

We are using the Cialdini’s influence principles to try to investigate how these pieces of text actually can influence consumers, voters, and in general. It’s going to be a project that is targeted to users, to consumers, but also internet platforms. They can actually use that, and implement that in their platform.

Most information is intended to influence people to do one thing or another. How are you differentiating between the kind of influence that you’re talking about versus any regular messaging?

Fernandes: What we are trying to do is not detect this information, or misinformation. Because I think that there are some data sets out there, and now working with colleagues that do machine learning, data science, and all of that, I learned a little bit about that.

And then if the consumer can pay attention to that label, which is, in fact, the tool that we want to build, how that can help them evaluate the information that they are reading. Because if it has a high degree  of authority, for example, which is one of the principles in Cialdini’s theory, that means that the information is coming from someone that perhaps is an expert in that particular topic that you are reading.

This is what we are trying to do. So I think this has the potential to really empower people to pay a little bit more of attention to what they are reading or listening to.

So much of your research is interdisciplinary, and you collaborate with a variety of disciplines, including political science, journalism, and engineering. Tell us about some of that research and why a interdisciplinary approach is valuable.

Fernandes: Most of my interdisciplinary research actually focuses on my second stream of research, which is how media can be used as a strategic tool during political campaigns. I have done research on the use of Facebook, when Facebook was just starting to be studied in academic circles.

Most of the research at that time was focused on how candidates were communicating with voters, what were the types of communications and things like that. So in this research, where I worked with colleagues from journalism and political science, we actually took a different approach. We focused on grassroots movements, and then how having the user communicate with other users within Facebook, actually promoted civic participation, political participation, and discussions around politics. So instead of focusing on top down, we focused on bottom up, and trying to understand that in a political context.

I think an interdisciplinary approach is when you can look at a phenomenon, and study that from multiple angles. And I love that. I love learning how other people think about the same issue or the same problem, the same phenomenon, that I’m interested in. Just learning how they think about that, and what tools they use. I’m loving this whole experience of connecting with colleagues that are from a completely different field as mine.