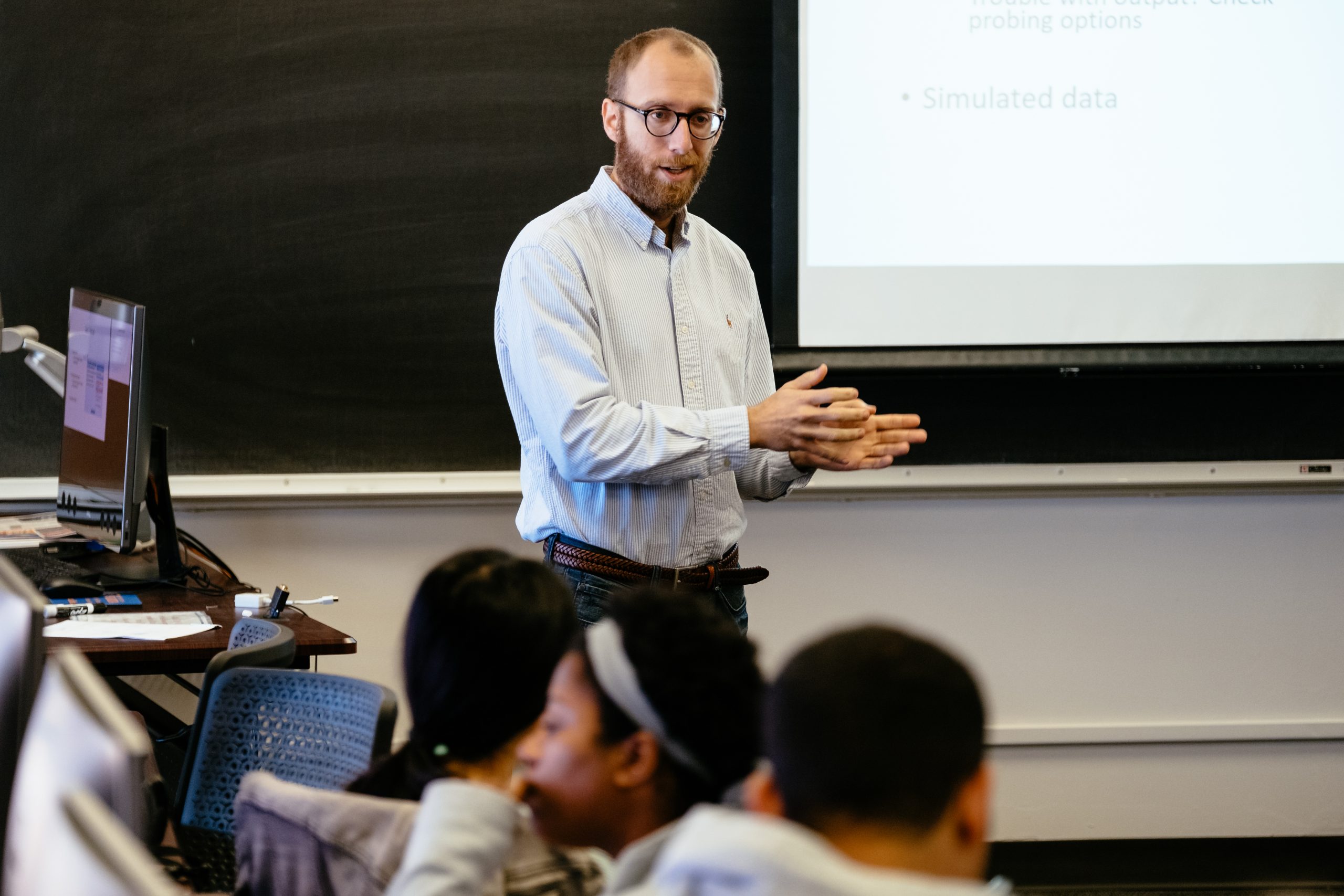 Dr. Frank Waddell: How Technology is Affecting Trust in News

University of Florida College of Journalism and Communications (UFCJC) Assistant Professor Frank Waddell, was interviewed on Sept. 10, 2020 by UFCJC Executive Director of External Relations Randy Bennett about his research on trust in news and his work with the Consortium on Trust in Media and Technology. Below the video is an edited transcript of that interview.

Randy Bennett: What sparked your interest in studying trust in news?

Frank Waddell: What really sparked my interest in studying trust in news was two things that happened at the same time. On the one hand, we saw this dramatic decrease in trust. While at the same time, I was already studying technology. So it seemed natural that given how important these two topics were and how they were already converging, my interest really just got naturally drifted towards the topic, and I’ve been studying technology and trust in news ever since.

Bennett:  What have been the key drivers in declining trust in news?

Waddell: Something that my research has shown time and time again, is that our trust in news is very much driven by our own preexisting biases and our trust in what others think about news. One of the biggest problems for every news consumer is they only have so much time available to them, but so much available news to choose from. So oftentimes, when we’re forced to evaluate information in a relatively quick manner, we rely upon news that might be recommended by a friend or perhaps that aligns with how we already feel. And the problem with that becomes these indicators, although they help us make a quick decision, don’t always help us make a very good decision about what type of information to actually trust.

Bennett: You’ve been doing work recently around comments on news stories. How are comments affecting trust?

Waddell: Something that we’re finding is a tendency called the “bandwagon effect.” The bandwagon effect is one’s tendency to go along with the crowd, especially when the crowd is negative. And that’s bad news for news organizations, because what my research is finding is just a few negative comments are enough to make people think that the crowd as a whole is negative and that the news itself is untrustworthy. So this anti-bandwagon seems to be persuasive for today’s news consumers, because rather than having to form their own opinion, which might take a lot of time, they can instead make a quick judgment based on what a few others have said. Unfortunately, though, for news organizations, this effect is much more common for when the crowd is angry, and much less common for when the crowd is positive towards news.

Bennett: Tell us about the research you’re doing around automated news, and how that’s affecting trust.

Waddell: One area of research that has been growing a lot for me is focusing on automated news and how automation affects trust. We know that automation is contributing to more and more news articles that we read every day. Weather reports and finance, even fantasy sports articles, are being written through automation. But what we know less about is how does the average reader respond differently to news when they think that automation has contributed to the process. What my research has done is take the exact same news article and just simply vary whether or not the reader thinks automation has contributed to the process.

What my studies have found is that, when automation is just seemingly involved in the process, that’s enough to undermine trust. And one reason we think that might be happening is because it’s surprising to see a robot writing the news. We might expect it to be shipping our Amazon order or vacuuming our carpet, but we’re not quite comfortable yet with news articles being written by automation, at least all on their own.

One big takeaway of my research on automation is that, although audiences do not like when automation works alone, we do see positive effects for trust and credibility when journalists and algorithms are perceived as working together. It seems like we get the best of both worlds. We get the perceived objectivity of the algorithm, while we get the familiarity of the traditional journalist. So moving forward as we use automation more and more, it’ll actually be very important that, rather than tucking away algorithms, that we bring them front and center so that audiences can actually acknowledge the contribution that they’re making to the news. So long as it’s a man-machine marriage, where journalists and machines are working together, it can lead to positive consequences for news trust.

One pressing question for working journalists right now is, when we do start to use algorithms more to contribute to news, how should it be acknowledged? What my research has found is that readers prefer to know that an algorithm has contributed at the very start of the news article. By comparison, when they’re only reminded at the end, that can actually make one feel a lower sense of trust, and find the news to be less credible. So for working journalists, it’s very important that it’s explicitly stated, and it’s stated sooner rather than later, so the reader doesn’t have a nasty surprise at the end that might violate their expectations.

Bennett: In your work as a Trust Scholar for the Consortium on Trust in Media and Technology, you’re looking at  gender bias in news, and particularly negative reactions to female journalists. Tell us why you’re conducting the research and what you’ve found.

Waddell: One of the most troubling trends in the past couple years is that female journalists are experiencing all kinds of increased abuse, both online and in their everyday lives. Unfortunately though, female journalists have always been under fire. It’s increasing in person now, but in entertainment media, female journalists have always been disparaged, hyper-sexualized, and presented in a very distorted way. What my research then at the Consortium has been studying is what type of viewer is the most likely to think that these unrealistic portrayals of journalism actually reflect real life. Are these the type of people who might be more hostile because they’re distorted world view is being supported by unrealistic portrayals of female journalists in everyday media like television and film?

Bennett: Is there something that news organizations can do about that?

Waddell:  News organizations who are worried about how female journalists are being treated and who are worried about how journalism as a whole is presented in popular media, can actually do a lot to help if they just let viewers and readers behind the scenes to see how journalism really works. A lot of journalists oftentimes will admit that the way that the average reporter or a news writer is presented is nothing like the real- world newsroom. But the average person who doesn’t have direct experience with the newsroom, has no other way of judging it. So news organizations can do much more to show how rigorous they are. How much ethics contributes to the decisions that they make. And these things might help to combat the otherwise unchallenged myths about journalism that are often harmful, but saturating popular television and popular film.

Bennett: What types of research are you exploring in the future?

Waddell: Future research on trust in news is probably going to be converging on how much do people trust algorithms relative to other cues to trustworthiness that used to be very important. So as we begin to trust more and more, and algorithms to select and write our news, the question becomes, do we still think about other criteria? Do we still care if it comes from a legacy news source? Do we still care if it is recommended by a trustworthy friend? Comparisons of traditional markers of trust and new digital markers of trust inside the same study is probably the new horizon for studying these journalism-related effects.

Bennett: How do we start educating our students about this? How do we integrate the research and the insights you’re finding into the classroom?

Waddell: The emerging trends that we’re seeing right now in journalism today are an indicator that the classroom experience and the courses that a typical journalism student will need to take are going to be rapidly changing, and changing soon. The rise of algorithms means that we’re going to need more coding classes. Students are going to need to become more literate when it comes to data. And they’re also going to need to become more comfortable with integrating automated tools, so that the time that they would have normally spent, let’s say, crunching numbers for a story, can now be offloaded to a machine while they provide the human touch to the news story.

But these skills are not going to come out of thin air. They’re going to need to be integrated into our journalism curriculum. And I think we already see that right now at the College of Journalism and Communications at UF. We have one of the largest, growing data journalism programs, and I think that’s going to be critical for our future students who are going into algorithm-driven careers in journalism as a whole.