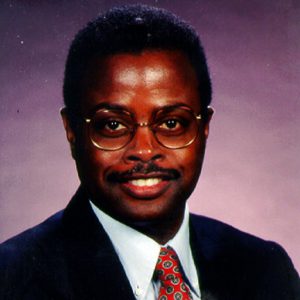 Leslie teaches graduate courses in international/intercultural communication, and race/gender/class and media, and conducts cross-cultural research on the impact of media content on society. At the undergraduate level, he teaches courses in advanced writing for electronic media, ethics and race and media. Dr. Leslie served as a Fulbright Professor at the University of Yaounde (Cameroon), from 1987 to 1989 and as a lecturer in the department of mass communication at the University of Zambia, 1984-1987. Additionally, he has taught, lived or done research in Belgium, France, South Africa, Mexico, Cuba and Brazil. Dr. Leslie speaks, reads, and writes in English, Spanish, French and Portuguese. In addition to his Washington Ph.D., Dr. Leslie holds an M.S. from Columbia University, and has published his research in the Howard Journal of Communications, the Journal of Afro-Latin American Studies and Literatures, Africa Media Review and Journalism and Mass Communication Quarterly. He was awarded the Stephen H. Coltrin Award for Excellence in Communications Education in 1997.

Be Who You Really Are. CreateSpace Independent Publishing Platform, Charleston, 2014.

“The Internet and Democratization in Africa: The Case of Zambia”, in Communication and Democracy in Africa, Goran Hyden, Michael Leslie and Folu F. Ogundimu (eds). Transaction Press, New Jersey, 2002.

“The Cross-Cultural Adjustment of Peace Corps Volunteers: A Case Study from Western China.” Submitted to Social Psychology of Education, 2014.

“IP-based Videoconferencing: Can it Promote Intercultural Understanding, Internationalization of the Curriculum and Social Change?” Journal of Communication and Social Change, Summer, 2007.

“Television and the Cultivation of Modern Racism: The Case of Brazil,” Journal of Afro-Latin American Studies and Literatures Vol. 1, No. 2 (January, 1996).

“International Televangelism/American Ideology: The Case of  The 700 Club.” International Conference on Television in Transition, MIT, Boston, May 2-4, 2003. http://cms.mit.edu/mit3/papers/leslie.pdf

“Televangelism and the Re-Presentation of Africa: A Pilot Study of Content and Ideology in The 700 Club.” Annual Meeting of the African Studies Association, Washington, D.C. , December 2002.

“Raca Magazine: A New Voice for Blacks and Browns in Brazil?” Presented to the Annual Meeting of the Latin American Studies Association, Miami, Florida, March, 2000.

“Examining the Myth of Racial Equality in Cuba: A Triangulation Approach,” presented to the Third Biennial Conference on Culture, Technology and Change in the Americas, April 5-9, 1995, Tampa, Florida.

“Television and the Cultivation of Modern Racism in Brazil: A Pilot Study.” Presented to the Annual Conference of the International Association for Mass Communication Research, Seoul, Korea, July, 1994.

“Television and Cultural Hegemony in “The ‘New South Africa’.” Presented to the International and Intercultural Communication Conference, Miami, Florida, February 1994.

“Illusion and Reality on Commercial Television: Comparing Brazil and the United States.” Presented to the International Communication Association, Chicago, Illinois, May 1991.

Dr. Leslie’s research interests include the relationship between mass communication and society, especially the political, social, cultural, psychological, economic and health consequence of mass media for both to the dominant and oppressed groups in society, both in the U.S. and internationally. Much of Dr. Leslie’s work has focused on the nexus between media content and the empowerment of disempowerment of Africans and Afro-descendants. The goal of his research is to build a strong empirical base for theorizing about the role mass media play in the social construction of reality and perceptions of individual efficacy and agency for both dominant and oppressed groups, as well as to develop media/communications strategies that will empower the less fortunate in their struggles for political, economic, cultural, spiritual, physical and psychological health and well-being.