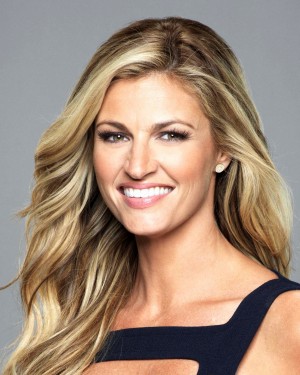 Erin Andrews is a FOX Sports reporter covering the network’s biggest events, including Super Bowl XLVIII, NFC Championship and divisional round games, Major League Baseball’s All-Star Game and World Series and more. She also contributes feature stories and sideline reports from FOX NFL’s top game each week during the season and adds to the network’s coverage of Major League Baseball and other marquee sports properties throughout the year. Prior to re-joining Fox in 2012, she spent eight years with ESPN hosting the first hour of ESPN’s “College GameDay” and served as a sideline reporter for college football and basketball games and Major League Baseball. Andrews appeared on the tenth season of “Dancing with the Stars” and made it to the finals and became co-host of the show in 2014.