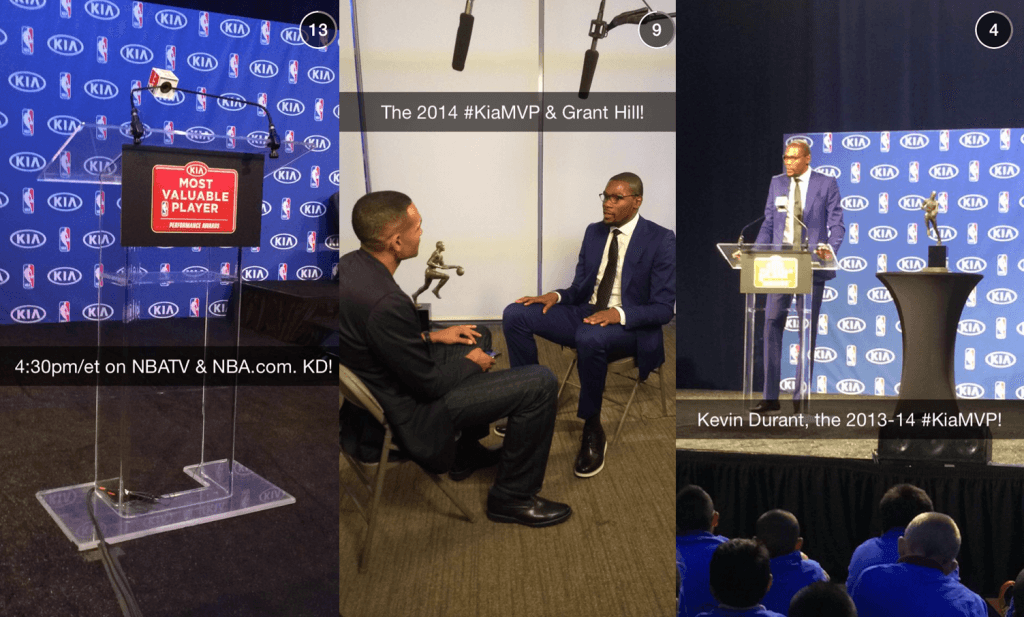 The NBA Gets in the Snapchat Game Early

With new ways of posting and sharing photos come new ways of telling stories. The NBA was an early adopter of Snapchat. For example, to help tell the story of Kevin Durant’s 2014 Most Valuable Player award sponsored by Kia Motors Corp., the NBA made use of Snapchat’s ‘Stories’ feature. With a series of three photos posted to the app, they encouraged fans on Snapchat to also watch on NBATV.com and NBA.com as Durant accepted the award. The first snap showed the lectern where the MVP would soon stand, with the words “4:30 pm/et on NBATV & NBA.com. KD!” running across the image. The second snap showed Durant sitting for an interview with NBA legend Grant Hill and the words “The 2014 #KiaMVP & Grant Hill!” The final snap featured Durant at the Lectern with the trophy on a pedestal in the foreground, and “Kevin Durant, the 2013-14 #KiaMVP!”

It’s not unusual for early-adopter organizations to get lots of attention when they use emerging platforms like Snapchat was in 2014, but that success can be fleeting if the attention doesn’t lead to longer-term relationships. Amid the fast growth of Snapchat’s popularity in 2014, one research firm reported that 77% of college students were using the app at least once a day. The researchers also asked college students what they were using it for, and “creativity” was the most common answer, chosen by 37% of the respondents. (You may be interested to know that only 2% reported using Snapchat primarily for ‘sexting.’) More importantly for public relations practitioners, though, were the findings in the same study that 73% of college students said they would open a snap from a brand they knew and almost half said they would open a snap from an organization even if they’d never heard of the brand.2

At the same time that the then-new Snapchat was wooing brands, the effectiveness of Instagram and Pinterest advertising was dropping fast, as demonstrated by a 2015 Forrester Research study. By the Forrester metrics, interactions created from brands on Instagram dropped from 4.2% in 2014 to 2.2% in 2015. On Pinterest, the rate dropped from 0.1% to 0.04% in that same period of time. As discussed in Chapter 6, there’s a big difference between 73% of students saying they would open a snap on a novel platform and .04% of users actually interacting with brands on an older platform (like Pinterest was in 2015). Timing, context and content are all important factors in using mobile and multimedia to engage publics, and it takes careful strategy to convert short-term attention to long-term relationships.

This post originally appeared on Oxford Presents
Dr. Tom Kelleher, chair and professor in the Department of Advertising. 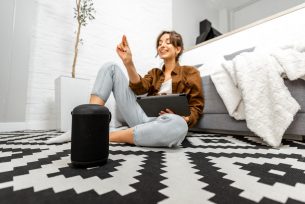