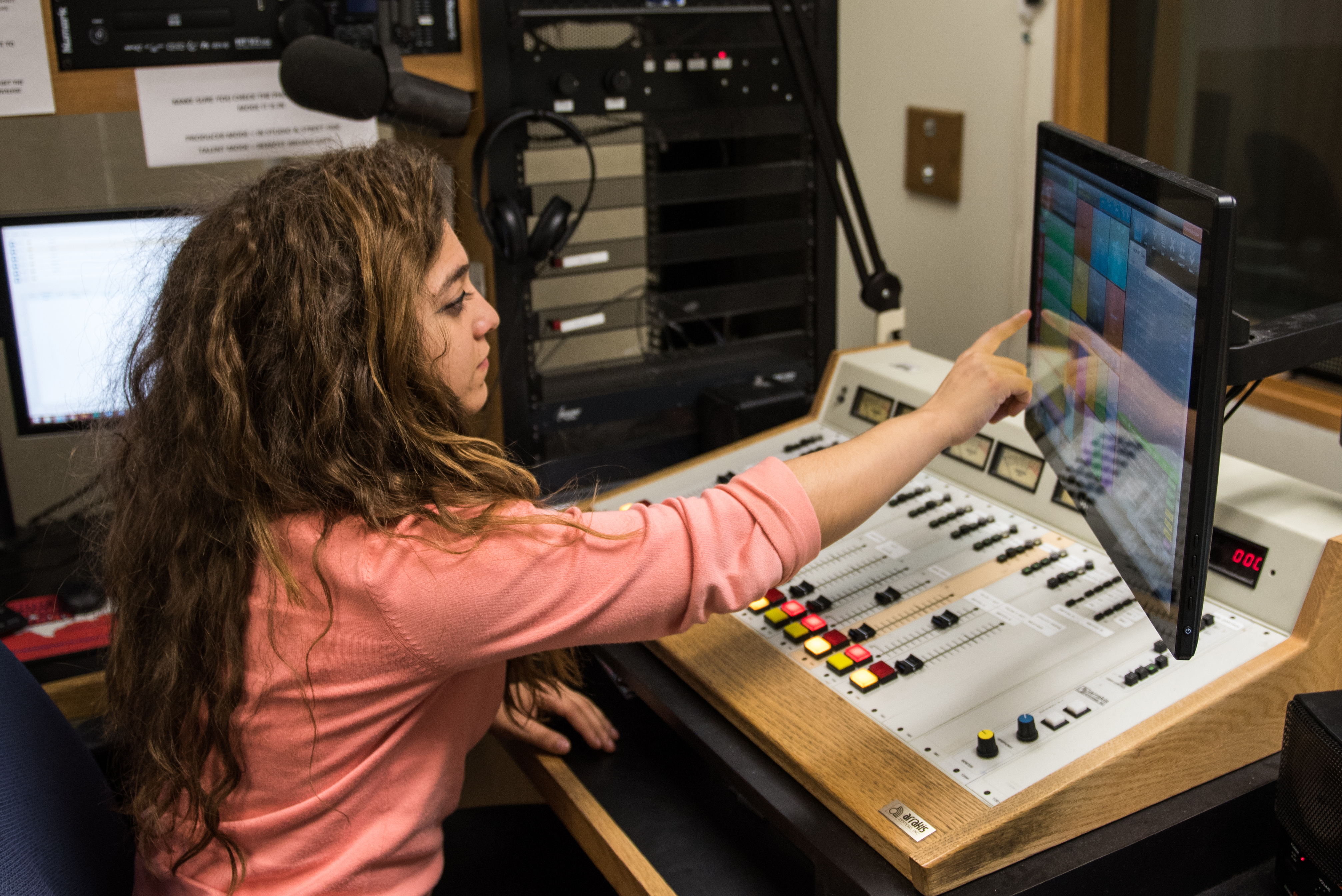 The College’s Division of Media Properties, located in the Flanagan Wing of Weimer Hall, includes seven broadcast stations, allowing students from throughout the College to gain experience in a competitive broadcast and multimedia environment. More than 200 students work in news, sports, weather, production, management positions, web design, promotions and advertising for the radio and television stations each semester.

Public broadcasting television station WUFT-TV is the PBS affiliate for North Florida and features award-winning educational and entertainment programming from PBS in addition to locally produced content, including a weekday newscast produced by the College’s students with mentoring from professional staff.  WUFT-TV signed on the air November 10, 1958 with a mission to provide educational broadcasting to the UF and other schools within the broadcast area. The station has evolved to featured PBS programming, local productions and an award-winning student produced and anchored weekday newscast. WUFT has three digital steams: 5.1 features high-definition programming primarily from PBS; 5.2 features the “how to programming” APT Create service; and 5.3 features The Florida Channel and the APT World service.

WRUF-TV6 is a low-power digital television station broadcasting over the air on channel 10.1 and on Cox Cable Channel 6 in Gainesville. The station broadcasts locally-produced content such as weather, news, Gator sports and features information about the University of Florida, Gator athletics and the Gainesville community. As with WUFT-TV, WRUF-TV serves as a primary training ground for the unique program the media properties operates in broadcast meteorology.

WRUF-AM, launched in 1928, is Gainesville’s first local commercial radio station and one of the oldest in Florida. WRUF serves 13 counties as ESPN 98.1 FM (in Gainesville) and 850 AM with six hours of locally hosted sports talk shows. The top-rated sports station in the market, ESPN 850/ESPN 98.1 also serves as the flagship to the statewide Gator Radio Network, which provides live play by play for all Florida Gator sports broadcasts.  The ESPN network affiliation provides college students with an opportunity to be a part of UF’s heritage radio station. They

WRUF-FM, Country 103.7 the Gator, is 100,000-watt station and the sister commercial station to WRUF-AM. The Gator features a contemporary country format targeting adults 25-54 and consistently ranks in the top ten of all stations in the Gainesville/Ocala radio market. The Gator is also home to Florida Gator sports, providing live broadcasts of football, men’s basketball and baseball to more than 16 counties in north Florida.

WUFT-FM and its repeater station, WJUF-FM, provide 24/7 news and talk to residents in North Central and Mid-Florida and are consistently ranked as the top radio station (commercial or public) in Gainesville. Programming on the 100,000-watt news/talk station features extensive local news and affairs from WUFT’s Innovation News Center along with the highest quality state and national programming from NPR, PRI and APM.  WUFT.org is the dynamic web presence for WUFT’s news and local information as is the WUFT mobile app.

The University of Florida’s commitment to the arts comes to life on WUFT Classic, the 24-hour classical and arts-formatted radio station, website and mobile app.  The station can be heard on a number of platforms including over the air radio (89.1 HD2, 102.7 FM in Gainesville) and in west central Florida on WUFQ-FM (88.5 mhz) which covers areas west of Gainesville to the Gulf Coast. WUFT Classic is available online at WUFT.org or via the WUFT Classic mobile app.

GHQ is a contemporary hit-radio formatted product available over the air on 95.3 mhz in addition to transmitting on the College’s WUFT-FM HD3 signal to the Gainesville-Ocala, Fla. market.  Audio and entertainment content is available nationwide through the GHQ app, which incorporates the entire suite of mobile audience engagement features designed by Futuri.

CJC offers a Meteorologist In Training (MIT) program, which provides students the opportunity to learn about the science of meteorology and the best techniques to communicate the forecast to audiences. Students from any major are welcome to participate, however the program is designed to complement the degree track of CJC students. MIT students will participate in educational workshops, shadow on-staff operational meteorologists, and produce content for local media property brands. Upon completion of the program, students will have gained the skills needed to be competitive applicants for weather anchor/reporter positions. For more information on this program, contact meteorologists Megan Borowski or Justin Ballard.

In 2013, WUFT-FM founded the Florida Public Radio Emergency Network or “FPREN”.  This public safety alerting project has served public radio and television stations across Florida with critical hurricane, tropical storm and other emergency alert information. The multiplatform content service includes the Florida Storms mobile app.  FPREN meteorologists provide live and produced daily weather and storm updates to the various media properties platforms, and are regular interviews and hosts of storm coverage on stations in Miami, Tampa, Orlando, Jacksonville, Ft. Myers and other Florida markets.  All coverage of these events occurs from the FPREN StormCenter, which is located in the Division of Media Properties. Since 2018, WUFT-FM has provided a similar public safety initiative for South Carolina ETV and South Carolina Public Radio.  In 2019, WUFT/FPREN received the Corporation for Public Broadcasting’s “Community Lifeline” award for service to the state of Florida before, during and following hurricane Irma.

The College and the Division of Media Properties enjoys a strong partnership with University Athletics Association (UAA), the entity that oversees University of Florida Gator athletics.  In 2011, the media properties entered into a long-term relationship with UAA to house GatorVision, the multimedia department charged with producing live and produced Gator athletics venue entertainment and online content support to FloridaGators.com.  Since that time, the GatorVision operation has produced more than a thousand live events from the GatorVision control rooms and countless game broadcasts that have been seen on the ESPN family of networks nationwide.  CJC students play a critical role in the success of GatorVision and numerous students have secured professional sports production positions based on their experiences in GatorVision.  The Division of Media Properties provides engineering and technical production support to the UAA-GatorVision staff in an ongoing manner as part of this partnership.