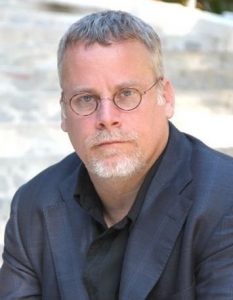 Best-selling and critically acclaimed author Michael Connelly returned to his educational roots at the University of Florida on Sept. 21, 2015 to talk about the art and craft of storytelling.

Connelly—a 1980 graduate of the College of Journalism and Communications—is a former crime reporter for the L.A. Times and has written nearly 30 novels and sold more than 60 million copies. He is a writer and producer of the Amazon Prime TV series “Bosch,” based off his character Harry Bosch. Connelly’s visit kicks off the College’s new Great Storyteller series.

Connelly’s Blood Work and The Lincoln Lawyer novels were both adapted to full-length movies.

His #1 New York Times bestsellers include The Burning Room, The Gods of Guilt, The Black Box, The Drop, and The Fifth Witness.  His next novel,The Crossing, will be published on November 3, 2015.

"In a book, you can go inside people's heads. In a script, you can't. You have to show it in their dialogue." #MichaelConnelly @UFJSchool

Bosch is the first TV show to film at the real Hollywood detective bureau, all thanks to his history in reporting the news #michaelconnelly

"If I anchor him in a real world and make it as real as I can that will sell him to the readers." #michaelconnelly #greatstorytellers

Advice for writers: "Even if you only write for 15 minutes (a day), your story won't settle to the bottom." #michaelconnelly

It's a great time to be in journalism. And the skill of being able to tell a story well will serve you forever #michaelconnelly

Best way to do research? Experience. Sit in the courtroom. #greatstorytellers #michaelconnelly

"You develop an ear for the telling details" #MichaelConnelly #greatstorytellers

You're looking for information, truth that's jarring to what's preconceived through other media #MichaelConnelly #TheGreatStorytellers

How to combat writer's block? Imagine you're in an environment that doesn't allow it, like being a reporter. #michaelconnelly

"I believe everybody is a good storyteller, especially when it's based on an experience they've had" #MichaelConnelly on writer's block

"I felt like a prince of the city because I knew stuff no one else knew yet. In the media you're at the center of society" #MichaelConnelly

"You're always in a position to be inspired." #MichaelConnelly #GreatStorytellers #UF

#MichaelConnelly on interviewing: Easy to say, but hard to do.

#MichaelConnelly words of wisdom: As a writer, you always have doubts. It's part of the job. #greatstorytellers

"There's a point where you put it out there and see what happens," @Connellybooks on getting published #greatstorytellers #michaelconnelly

#michaelconnelly says it's a great time to be a journalism major because of diversity of career options/media outlets. #greatstorytellers

"Who knows if you'll ever get published, but you want it to be a fun experience. So I chose something that's not me" #MichaelConnelly