The Great Storytellers series showcases some of today’s most highly-regarded storytellers across media and platforms.  The series will feature award-winning authors, journalists and photographers, documentarians, bloggers and performance artists. All will share their insights on how to best engage audiences in today’s cluttered media landscape. 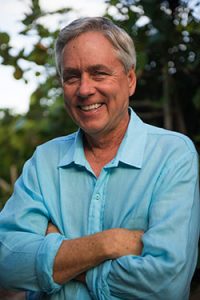 Carl Hiaasen, B.S. Journalism 1974, is an award-winning journalist and columnist and best-selling author. From 1985 to 2021, he wrote a regular opinion column for the Miami Herald.

Tourist Season, published in 1986, was Hiaasen’s first solo novel. Since then, Hiaasen has published Skin Tight, Native Tongue and eleven national bestsellers. All the novels are set in Florida, where they are read more as documentary than fiction. Hiaasen is also responsible for several popular novels for young readers: His first, Hoot, won a Newbery Honor and was made into a feature film.

For his journalism and commentary, Hiaasen has received numerous honors, including the Damon Runyon Award from the Denver Press Club and the Lifetime Achievement Award from the National Society of Newspaper Columnists. He retired from the Herald in March 2021. 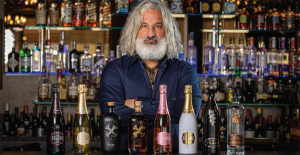 UF alumnus Brett Berish is the president and CEO of Sovereign Brands, a family-owned, international wine and spirits company headquartered in New York, which sells its portfolio of products in more than 100 countries globally.

Berish has created some of the world’s hottest brands, including the Luc Belaire line of French sparkling wines, Bumbu, a craft rum that is the best-selling brand in the U.S. premium rum category, as well as McQueen and the Violet Fog, a small-batch gin from Jundiai, Brazil, and Sovereign’s newest release, Villon, which is revolutionizing the cognac category. Berish’s past brands include Armand de Brignac (“Ace of Spades”) Champagne, which he sold to Jay-Z in 2014.

His self-made success has informed his company’s values, culture and celebrity partnerships, culminating in Sovereign’s prolific marketing campaign “Self Made Tastes Better,” which includes a series of interviews hosted by Berish alongside some of the world’s biggest celebrities, from recording artists to athletes, actors, TV personalities and influencers – all of whom are also confirmed fans of Sovereign’s brands.

Leonard Downie Jr., the Weil Family Professor of Journalism at the ASU Cronkite School, was The Washington Post Executive Editor from 1991 to 2008. During his 44 years in the Post newsroom, he was also an investigative reporter, editor on the local and national news staffs, London correspondent, and, from 1984 to 1991, managing editor under then-executive editor Ben Bradlee.

As deputy metro editor from 1972 to 1974, Downie helped supervise the Post’s Watergate coverage. He also oversaw the newspaper’s coverage of every national election from 1984 through 2008. During his 17 years as executive editor, The Washington Post won 25 Pulitzer prizes.

Women and the Art of Film

In spring semester 2020, during the COVID-19 pandemic, CJC hosted a series of Facebook Live interviews with prominent and diverse women in film. The series was produced and hosted by Telecommunication Lecturer Iman Zawahri.

Jacqueline Olive, a 2007 graduate of CJC’s Documentary Institute master’s program, is an independent filmmaker and immersive media producer with more than a decade of experience in journalism and film. She founded Tell It MEDIA, a production company that creates short and feature-length documentaries, narrative fiction, hybrid films, and immersive media projects that tell stories of diverse people, places, and cultures.

Her debut feature documentary, Always in Season, premiered in the U.S. Documentary Competition at the 2019 Sundance Film Festival and was awarded the Special Jury Prize for Moral Urgency. Olive is currently producing a VR companion to Always in Season that uses 360° video and computer-generated imagery to explore themes of dehumanization and violence and offers strategies to black women for moving confidently through racialized public spaces.

Scott Sanders,  B.S. Advertising 1979 and 2006 Hall of Fame, is an Emmy, Grammy and Tony Award-winning, film, television and theater producer. Jeff Klinkenberg is a devotee of Florida, a rare breed of native son who has embraced Florida’s beauty, faults, and immense changes. The reason? He searched harder for the stories of realFlorida.

In fact, for nearly four decades as a writer for the Tampa Bay Times(formerly the St. Petersburg Times), his column “Real Florida” was a direct pipeline by which he could illuminate the people, places, and problems of Florida to readers with unmistakable wit, narrative style, and effervescent reverence. Warren Zanes is a musician, teacher and writer whose subjects range from Jimmy Rodgers to Dusty Springfield to the history of Warner Bros. Records. He is the author of Tom Petty: The Biography, originally published in 2015.

As a musician, he made three records with 1980s rock-and-roll band the Del Fuegos and three as a solo artist. He has worked on several high-profile music projects, including, most recently, the upcoming George Harrison documentary directed by Martin Scorsese, and as executive director of Little Steven Van Zandt’s Rock and Roll Forever  Foundation. Claire Smith is a pioneering, female sports journalist who has been covering baseball for more than three decades, including seven years as a national baseball writer and columnist for The New York Times.  She has covered baseball for ESPN since 2007.

In early 2017,  she was honored with the Baseball Writers’ Association of America’s J. G. Taylor Spink Award for meritorious contributions to baseball writing — the first female honoree. Best-selling authors Michael Connelly (B.S. Journalism 1980, Alumnus of Distinction 2003) and James Patterson speak in the Reitz Union as part of GatorNights on February 24, 2017. The event was co-sponsored by the CJC Great Storytellers series. Cenziper is an investigative journalist with The Washington Post.  Previously, she worked for more than five years at the Miami Herald where she received the 2007 Pulitzer Prize for local reporting for her year-long investigation of housing corruption in Miami, which led to the convictions of several developers and to a federal takeover of the county housing agency. In 2006, Debbie was named a Pulitzer finalist in explanatory reporting for her series exposing breakdowns in the nation’s hurricane-warning system. Best-selling and critically acclaimed author Michael Connelly returned to his educational roots at the University of Florida on Sept. 21, 2015 to talk about the art and craft of storytelling.

Connelly—a 1980 graduate of the College of Journalism and Communications—is a former crime reporter for the L.A. Times and has written nearly 30 novels and sold more than 60 million copies. He is a writer and producer of the Amazon Prime TV series “Bosch,” based off his character Harry Bosch. Connelly’s visit kicks off the College’s new Great Storyteller series.