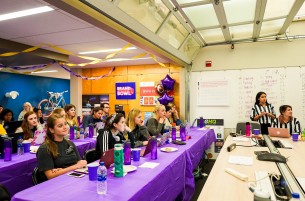 The Agency at the University of Florida College of Journalism and Communications (UFCJC), UFCJC Ad Society and the UF chapter of the Public Relations Student Society of American (UF PRSSA), partnered to create the first-ever Brand Bowl during the Super Bowl on Feb. 3. The Brand Bowl was designed to…

The UF Chapter of the Public Relations Student Society of America (PRSSA) received national recognition at the organization’s 2015 conference in Atlanta, including Star Chapter Recognition. The College’s Bateman Case Study Competition team received their second place prize at the conference as well. Individual honors were bestowed on UF Chapter…