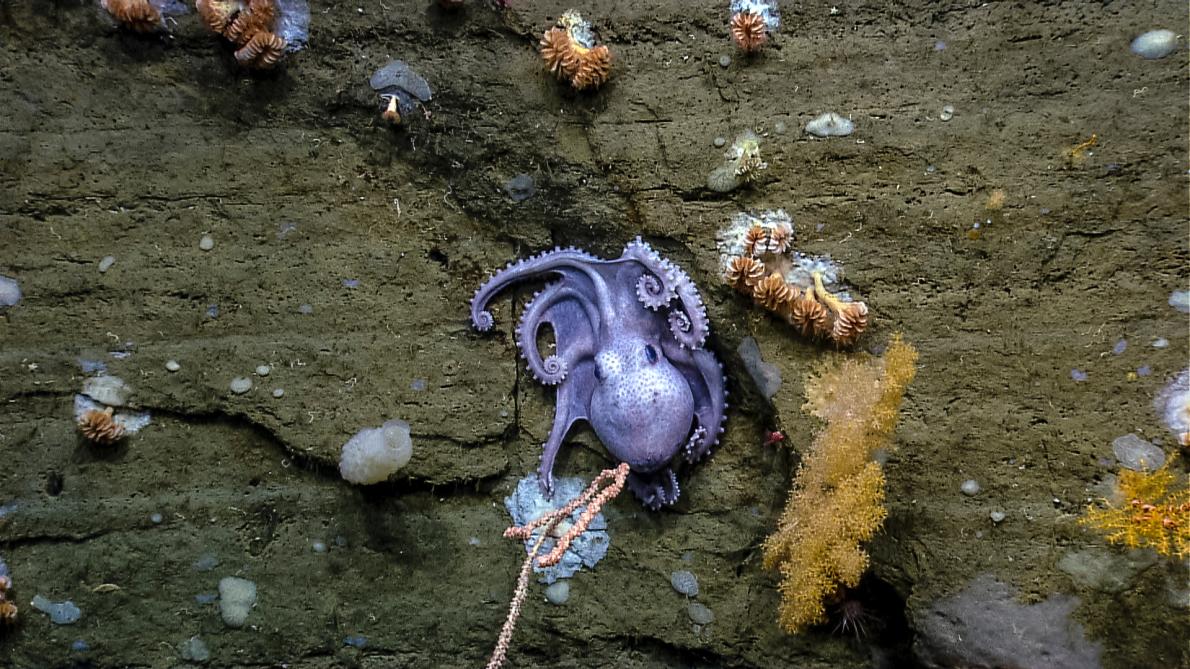 By Cynthia Barnett
In a milestone for ocean protection, President Barack Obama on Thursday established the first marine national monument in the Atlantic, prohibiting commercial fishing and other types of extraction in a series of deep canyons and extinct undersea volcanoes that lie more than 150 miles off southern New England, along and beyond the continental shelf.

“The notion that the ocean I grew up with is not something I can pass on to my kids and my grandkids is unacceptable. It’s unimaginable,” Obama said in announcing the Northeast Canyons and Seamounts Marine National Monument at the State Department’s Our Ocean conference in Washington, D.C. “Dangerous changes in our climate caused mainly by human activity, dead zones in our ocean caused mainly by pollution that we create here on land, unsustainable fishing practices, unprotected marine areas in which rare species and entire ecosystems are at risk. All those things are happening now. They’ve been happening for a long time. So if we’re going to leave our children with oceans like the ones that were left to us, we’re going to have to act and we’re going to have to act boldly.”

The monument consists of two distinct areas covering a total of 4,900 square miles. The first, running in a strip along the edge of the continental shelf, will protect three massive canyons cut thousands of feet into the shelf. The canyon walls are covered with deepwater corals, anemones, and sponges that “look like a walk through Dr. Seuss’s garden,” said Peter Auster, senior research scientist at the Mystic Aquarium and research professor emeritus at the University of Connecticut.

South of the continental shelf, where the seafloor plunges into the abyss, a second area will protect four seamounts—named the Bear, Physalia, Retriever, and Mytilus. Rising more than 7,000 feet from the ocean floor, taller than the Appalachians, they are ancient volcanoes formed a hundred million years ago by the same hot plumes of magma that created New Hampshire’s White Mountains. Bear, the shallowest of the chain and closest to land, lies more than 3,000 feet beneath the ocean surface.

The area covered by the new monument, which ends at the edge of the exclusive economic zone, 200 miles from land, is known for a striking abundance of species and pristine habitats across a wide range of temperatures and depths. Endangered North Atlantic sperm whales forage near the surface. The canyons are studded with branching bamboo corals as big as jungle gyms.

“These are places where you can go and still find animals, big animals, never named by science,” said Auster, who has been exploring the region in a variety of undersea vehicles for the past 30 years. “They are places that represent how much we have yet to learn about the oceans. They are outstanding repositories of our natural heritage for the future.”

The establishment of the New England monument follows the president’s expansion last month of the Papahānaumokuākea Marine National Monument in the northwestern islands of Hawaii to more than half a million square miles—the largest protected area anywhere on Earth. Obama has now protected more acreage than any other president, most of it underwater.

Off New England he has now created a no-take reserve just a few tens of miles from the historic fishing grounds of Georges Bank. Presidential historian Douglas Brinkley, author of environmental biographies of Theodore Roosevelt and Franklin D. Roosevelt, described the action as “a sweeping step for the United States to take a global lead on the oceans, much like other parts of the world began to protect iconic parks after the National Park Service was created a hundred years ago.”

“If we can do this in our most storied fishery,” he said, “the rest of the world can do it.”

Opposition From the Fishing Industry

New England’s commercial fishing industry fought the designation of Canyons and Seamounts, joining a chorus of objection to Obama’s use of the Antiquities Act. The opposition helped derail a proposal to create a marine monument at Cashes Ledge, a ridge that lies closer to the New England coast, reaches almost to the surface, and is teeming with life.

Jon Williams, CEO of the New Bedford-based Atlantic Red Crab Co., which harvests red crabs along the continental shelf in the area covered by the monument, argued in Congressional testimony that wielding the Antiquities Act for marine conservation subverts the work of the regional fishery councils, which are charged under the federal Magnuson-Stevens Act with regulating the nation’s fisheries.

“After 40 years of crab fishing, our fishing grounds are described as ‘pristine’ by the same environmental groups who seek the monument designation,” said Williams, whose company has earned sustainability certifications from the New England and Monterey Bay aquariums. “If these habitats are still ‘pristine’ after 40 years of fishing, how can a serious argument be made that the area is in imminent danger and in need of immediate, unilateral protection by presidential fiat?”

Nationwide, eight councils develop marine management plans for their regions, setting up seasons, quotas, and closed areas in a public process. Leaders of all eight councils wrote to President Obama to urge that they be allowed to continue managing fisheries in any new monuments created under the Antiquities Act. The final monument boundaries reflect a compromise with the industry, giving the red crab and lobster industries seven years before they are required to pull out of the monument area. Other commercial fishers will have 60 days to transition out of the area. Recreational fishing will be allowed within the monument.

Scientists who have pushed for the area to be protected projected commercial fishing could become more intensive as other areas become depleted or are closed for recovery. In addition to protecting at-risk species and a one-of-a-kind ecosystem, the designation is meant to “create natural laboratories for scientists to monitor and explore the impacts of climate change,” according to the White House.

Other future threats cited in scientific assessments of the monument include oil and gas exploration and drilling; manganese crust mining; and methane hydrate mining. Recent expeditions to the canyons have identified several new methane cold seeps on the seafloor—rare habitat for chemosynthetic species that survive in darkness and harness chemical energy from the methane.

CJC Environmental Journalist in Residence Cynthia Barnett has been covering President Obama’s ocean legacy for National Geographic leading up to her forthcoming story in the magazine about whether the United States can protect extraordinary places in the 21st Century as we set aside landscapes such as Yellowstone and the Grand Canyon in previous centuries. In August she wrote about the Papahānaumokuākea Marine National Monument in Hawaii, which is now the largest protected area on Earth. In September she covered the president’s creation of the first undersea monument in the Atlantic Ocean, the Northeast Canyons and Seamounts Marine National Monument off New England. Cynthia is teaching Nature and Adventure Journalism this fall.

CJC Advertising Assistant Professor Juliana Fernandes was interviewed on Oct. 26, 2020 about her research on the impact of negative and persuasive messaging on political...