In Support for the Supreme Court, Partisanship Trumps Concern Around Gender Equality

This article originally appeared in the London School of Economics USAPP blog.

On Friday, June 24, the Supreme Court overturned the landmark ruling of Roe v. Wade, which since 1973 had established a constitutional right to an abortion. This decision has since shaken US public opinion. This decision follows a series of gender-related controversies involving the Supreme Court, such as the 2018 Kavanaugh confirmation following sexual assault allegations and the 2021 Court’s rule on the so-called Texas abortion ban, which banned abortion after six weeks of pregnancy, even in the case of rape and incest.

A legitimacy crisis of the Supreme Court?

Americans’ trust in the ability of the Supreme Court to make decisions for the country has been generally stable. But this has depended on the perception that the Supreme Court is insulated from partisan politics and therefore acts as an independent, non-partisan democratic actor.

Given this, overturning Roe, a highly politicized issue, could significantly impact the perception that the Supreme Court is a non-partisan, legitimate actor in democratic life. Also, given that overturning Roe v. Wade disproportionally affects women’s rights, one might expect men and women to differ in their trust in the Supreme Court, evidencing a gender gap.

Has the decision of the Supreme Court to overturn Roe deepened partisan lines in the trust that Americans have for this institution? Or has gender identity overridden the role of partisanship among Americans, leading Democratic and Republican women to lose confidence in the Court? To find out, we analyzed how the public’s views on the Court have changed over the last four years and how the decision on Roe affected its legitimacy through a survey of more than 1,000 US residents, whom we have been tracking since 2018.

Analyzing how Americans’ views of the Supreme Court have changed

In a 2018 study, we examined how Americans’ trust in the Court changed after the confirmation of Justice Brett Kavanaugh who had faced accusations of historic sexual assault. In March 2022, we re-invited the same survey participants to see how their opinions had changed. Half the respondents, randomly chosen, were just asked to report their trust in the Court. The other half reported their trust in the Court after receiving information about the Court’s ruling on the Texas abortion ban. In the wake of the leaked draft of the decision in early May 2022, we ran another survey with the same participants and proceeded in the same way; participants were randomly assigned to express their opinions before or after being informed about the draft opinion. Right after the Supreme Court overturned Roe on Friday, June 24, we ran another survey and proceeded in the same way.

We recruited the respondents through Amazon’s Mechanical Turk (MTurk)—an online crowdsourcing platform. MTurk samples collected on an opt-in basis are not representative of the whole population. When compared against a representative sample, our respondents were 18 percentage points more likely to be college-educated and 22 percentage points more likely to identify with the Democratic Party. Our sample was more comparable to the national sample in terms of gender, age, and racial composition.

Notably, the distributions of the views on abortion among Democrats and Republicans in our sample mirrored those of Democrats and Republicans in another representative survey that used the same questionnaires. Furthermore, we checked whether the results presented below were observable among only well-educated people to assess the extent to which the unrepresentativeness of our MTurk sample might have skewed our conclusion—and found that the patterns are generally similar.

Despite notable limitations of the online convenient sample, following the same respondents around critical moments provides us with an unusual opportunity to examine whether and how Americans’ views on the Supreme Court have polarized across gender and partisan lines.

A growing partisan gap in trust in the Court.

We found that the Supreme Court appears to have become a partisan institution in the eyes of the US public. As Figure 1 shows, before Kavanaugh’s confirmation, trust in the Court did not show a clear partisan divide: Despite some differences, Democrats and Republicans were generally in agreement in trusting the Court to make the right decisions for the country. After Kavanaugh’s confirmation, however, we saw the emergence of a partisan gap—a gap that has continued to grow. Since October 2018, Democrats’ trust in the Court declined from above 60 percent to less than 16 percent after reminding respondents of the Court’s ruling on Roe. In contrast, Republicans’ level of trust has mostly remained high and stable over time,

There might still be partisan agreements on abortion rights.

Despite these general trends, information about the Court’s ruling on the 2021 Texas ban on abortions led to different reactions than both the information about the leaked draft to overturn Roe and the official overturn of this landmark ruling. When we told respondents about the Texas ban—which virtually outlaws all abortions after six weeks and makes no exceptions for rape—both Democratic and Republican voters decreased their trust in the Supreme Court. On the contrary, when we told them about the leaked draft to overturn Roe—without references to specific restrictions—and after Roe was officially overturned only Democrats’ trust in the Court dropped, but Republicans remained unmoved on average.

We suspect that this difference is due to the fact that while many Republicans support restricting access to abortion, only a minority wants a ban on abortion without exceptions. This suggests that if the states’ ongoing decisions on their abortion policies after the overturn of Roe ends with complete abortion bans in many states, it may give at least some Republicans reasons to lose confidence in the Supreme Court as well.

Partisanship, and not gender, shapes trust in the Supreme Court.

Third, despite the significant implications of the Court’s decisions on issues of gender equality, gender identity does not seem to shape changes in trust in the Supreme Court. Figure 2 highlights the point: while the partisan gap in trust in the Court skyrocketed since 2018 (from 9 to 53 percentage points), the gender gap has remained low and stable. In other words, after these series of decisions involving issues of gender equality and women’s rights, American men and women did not express different levels of trust in the Court.

Overall, the Court’s decisions around issues of gender equality and women’s rights have found Democratic men and women aligned in their increasing distrust of the Court, and Republican men and women aligned in their stable trust in this institution. Partisanship trumps concern around gender equality, an aspect of public life that continues to move backwards in American society. 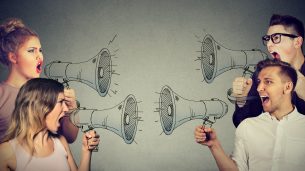