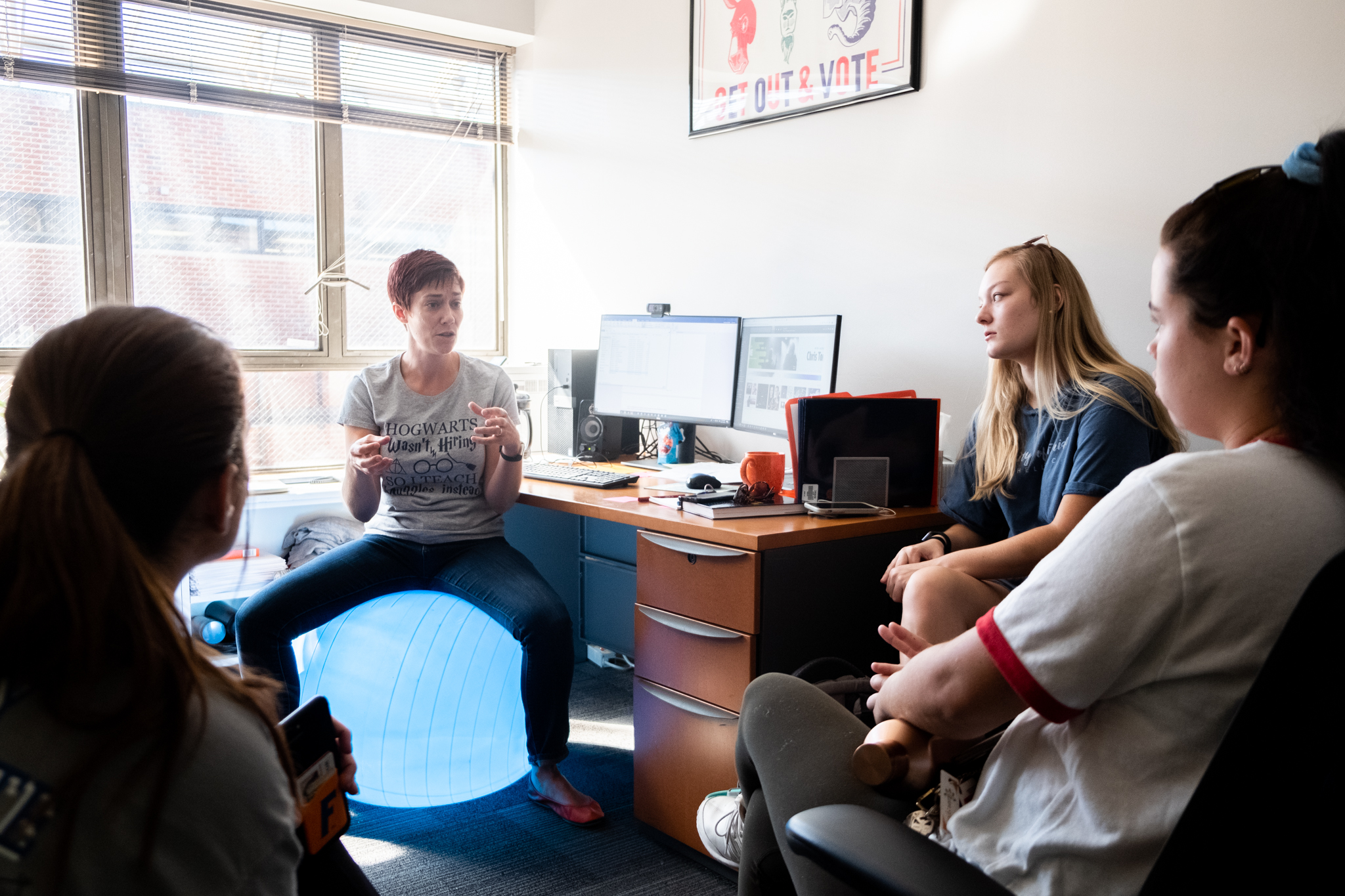 Dr. Myiah Hutchens: Political Communication and Its Impact on Trust in Media

Q: How did you become interested in studying political communication?

Myiah Hutchens: The reason I’m interested in political communication and how I got interested in political disagreement in particular is based on the idea of me being an eternal optimist and thinking that democracy works. I am someone who believes in what’s called deliberative democracy, so that the best ideas happen when all views are presented. In order to have all views presented, that means that we need to talk to people who are different from ourselves. And there’s a lot of evidence that good things happen when we do that. However, if we look at reality, we see that sometimes that’s hard, that people have problems doing that, or that it happens in not the best way or not in the most ideal situations. So what I want to study is how can we get people to do that, and how can we do that with good outcomes.

Q: Are there societal, political or technological trends that are contributing to this polarization?

Hutchens: I would argue societal trends do make that problem more of an issue. In particular, it increases what we call affective polarization. Affective polarization is how much we dislike the other side. We’ve seen that this is something that’s been occurring for a really long time, and it continues to get worse.

I can go on to Facebook or Twitter and see people who are saying things that are different from me, and I don’t have to engage if I don’t want to. In face-to-face settings, there’s a lot more pressure and that changes how that interaction happens, and we’re more likely to pull away from those. In our interpersonal interactions, we’re more likely to talk to people who are like ourselves, and that’s actually what’s driving polarization.

Q: How is the increase in disinformation affecting that polarization?

Hutchens: Increased disinformation is definitely creating a problem. And that is one place where social media is sort of a unique contributor, and that’s because it’s so much easier for that information to spread. It spreads more quickly. Disinformation has always been present, conspiracy theories have always been present But, before, you had to look a lot harder for it.

What we’re seeing now is more of this idea that news finds me, and when news finds you, misinformation also finds you, and that is something that harms how we talk about politics, because we aren’t talking about the same facts anymore. When everyone has different “facts,” it’s going to be harder for us to talk to each other and to be able to reach some sort of compromise.

Q: In addition to the impact of social media on political discourse, what other key insights have emerged in your research?

Hutchens: One of the key insights for me would be that civil disagreement is okay. When I’ve done research looking at how we respond to arguments in comment threads, we can do that in a civil way, or we can do that in an uncivil way. And when we’re disagreeing in an uncivil way, that is detrimental for intentions to engage, intensions to talk to each other. But if it’s done in a civil way, that’s okay. So there still is sort of hope for us.

Another key insight for me is that the best way to improve the tone of our conversation is through policing our ingroup. If I am a Republican, I should tell other Republicans to not be jerks online. That’s going to be much more effective versus if I’m a Democrat and I’m telling those Republicans to not be a jerk online. We need to talk to ourselves first and make sure that we’re creating an effective environment that way.

Q: How has political discourse changed during the course of your research in this area?

Hutchens: I tell my students that I work in the most exciting field ever, that I am never going to have the same day twice, and that’s true in everything that has to do with mass communication. It’s an environment that constantly changes. This is my 11th year as a professor now, and the media environment, especially in regards to politics, has changed dramatically in that amount of time. Facebook 11 years ago was not at all the type of contributor that it is now.

I remember the 2008 election and talking about Obama using some social media and buying billboards in different online video games. That was crazy at the time. Nobody was doing that.

Now, if you don’t do that as a candidate, if you don’t spend time on social media or try to reach audiences in these different ways, you would have no chance. So this has hugely shifted and I think is going to continue to shift, and is one of the things that I love about my job and the area of research that I’m in, I am never going to have the same day twice.

Q: For the Consortium on Trust in Media and Technology, you’re looking at how negative comments on news articles affect trust. What are you finding?

Hutchens: I’ve already run two of the studies for that and finding some things that I think are interesting. In particular, what I want to look at is how comments under news articles influence trust in media organizations. There’s been research that’s looked at that and looks at how that affects attitudes, how it affects beliefs in the importance of the issues that are being discussed, but nobody had looked at how that impacts the media organizations themselves.

The second step that I did after that was then to say, okay, does it matter what people are being negative about. If people at the end of the story are just saying, oh, well, the media is horrible versus talking about the source specifically or attacking the author or the story itself, how does that impact media trust?

What I saw there, something that I’m very optimistic about, is that the comments about media generally didn’t have an effect on trust in comparison to no comments. So if people are just lambasting the media, that doesn’t appear to matter. It is when people are making more specific comments about not trusting this story, or you can’t trust this author, there’s something wrong with this, that does have an impact.

As a follow-up to that study, I will be looking at what we call expectancy violations. If I’m somebody that when you look at my username or my profile and you would think I’m a Democrat, then I’m saying something that’s supportive of Republicans, does that make you as a fellow Democrat pay more attention? Is this a way potentially to combat misinformation? Because we know that we respond differently to our ingroups and our outgroups. So taking that idea and then applying that to trust I think could give us a potential way to improve our communication and trust in media.

Q: What types of topics are you interested in looking at going forward?

Hutchens: Going forward, I plan to stay in this track, because everything changes. So I will be continue to be looking at ways that we can improve our discussion, especially as we’re in a constantly changing media environment. For example, how is TikTok going to influence politics? I haven’t looked at that yet, but I bet it’s going to have some sort of influence, and somebody needs to look at it.

Q: One final question. How do you integrate your findings into your teachings?

Hutchens: I am absolutely able to use my research in my teaching, and I think that’s one of the most fun ways to keep your classes fresh. This fall [2020], I’m teaching an undergraduate political communication course in the Public Relations Department. It’s the first time that we’ve done it. Politics is persuasion any way you slice it. Politics is PR. So being able to talk about the changes that are happening as we’re seeing them is something that’s important.

If you don’t have someone who’s researching that topic at the time, you’re going to have to wait for the next textbook update or the next thing to come out, but this is something that every time I teach that course, that course is going to be different, and it’s going to be different because I’m watching it and seeing it as it’s happening, which makes it very fun for me and hopefully for the students as well.