2017 marked the 40th anniversary of Ralph Lowenstein’s arrival at the College of Journalism and Communications.  Dr. Lowenstein left an indelible mark on the College, which will celebrate its 50th Anniversary in 2018.

In the summer of 2016, Dean Diane McFarlin sat down with Dr. Lowenstein to reminisce about his experience and many accomplishments.  The full video and edited clips from that interview are on the right.

Learn more about Dr. Lowenstein in this interview for the Samuel Proctor Oral History Program. 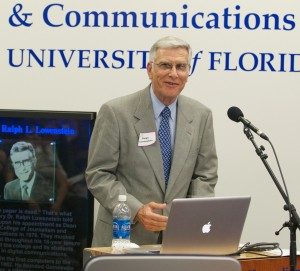 Dean Emeritus Ralph L. Lowenstein was named the third Dean of the College in 1976 following the retirement of John Paul Jones, Jr.  Lowenstein was chairman of the news-editorial program at the University of Missouri prior to coming to UF. 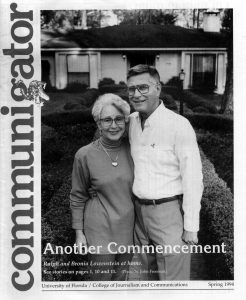 After retiring, Lowenstein stayed active in the College and the community.  He regularly walked the halls of Weimer, greeting students and faculty.  Regarded as a national visionary for how technology would change the journalism and communications professions, Lowenstein has been an inspiration in the College for more than 35 years.