University of Florida College of Journalism and Communications student films and news reports were nominated for recognition in the National Academy of Arts and Sciences (NATAS) 2020 Suncoast Chapter Student Production Awards competition. 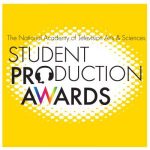 In addition, Hasley Pitman, B.S. Telecommunication 2020, was nominated in the General Assignment Serious News category for “Creating a New Normal,” Quan McWil, B.S. Telecommunication 2020, received a nod in the General Assignment Light News category for “CSI Camp,” and “After the Eye” by WUFT students was included the in the Magazine category.

Due to the COVID-19 pandemic, no date has been set to announce the winners in the 2020 competition.

The University of Florida College of Journalism and Communications honored outstanding alumni, faculty, staff and graduate and undergraduate students during the annual awards ceremony that...