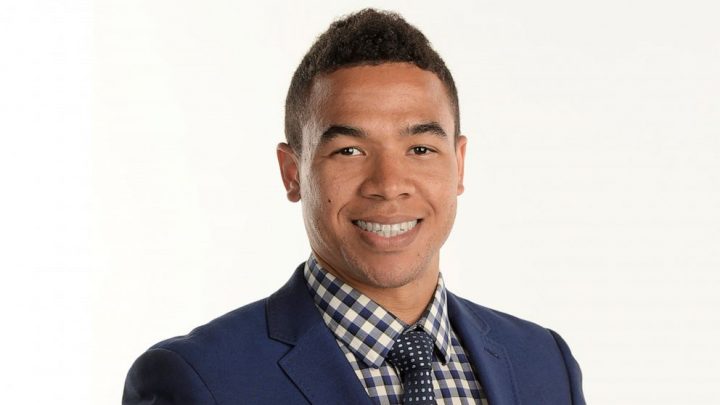 “He was the best of us. He still is the future of Gator greatness.”

Edward Aschoff, B.S. Journalism 2008, was by all accounts an outstanding student, loving friend, and admired colleague. He touched the lives of everyone around him, spread joy effortlessly, and inspired all who knew him.

Edward, who was a respected college football reporter with ESPN, passed away on Dec. 24, 2019 — his 34th birthday — after a brief illness. The outpouring following the announcement of his death was extraordinary. To read more about his life and career, visit:  https://www.legacy.com/obituaries/clarionledger/obituary.aspx?n=edward-carmichael-aschoff&pid=195048797

The College has created the Edward Aschoff Memorial Fund in his honor, which will provide support for CJC students involved in sports journalism. If you would like to contribute to the fund, click here: UFgive.to/EdwardAschoffMemorialFund/

We asked some of his friends, teachers and colleagues to share their experiences with Edward.

“Eddie was one of my best friends in college. He was a key part of the privileged experience I had at UF in 2007. Our friend group was outrageous and diverse and celebrated and just so young and unaware.

Eddie was a champion for women and queer people. He was a light. He still is. One of the greatest young alums from our College, and one of the most important men in my life.

He came back to Weimer every year I’ve taught, helped me understand what I was doing here, and helped me take it all so much less seriously. I used his story regularly to show our students how quickly and joyfully and successfully they could rise by trusting greatness.

“I had Ed in several classes as an undergrad, and he Skyped into my Sports Media and Society course when he was working at ESPN. He was talented, smart, funny, and loved people and storytelling.

In one class in 2008, called ‘Finding Your Voice,’ the prompt for a short writing assignment was to write about an object. Ed wrote about a stuffed Mickey Mouse doll that he had for 20+ years. His piece was about all that Mickey had endured when Ed was a kid—how he ripped it apart and beat it up when he was mad, but also how his mother and grandmother always kept repairing him. So Ed used Mickey as a vehicle to talk about loyalty and love. When we were done critiquing, Ed pulled Mickey out of his bag. Everybody in the class started tearing up.”

“Edward was a student in my Sports Reporting class the first year I was an adjunct professor at UF. I taught the class for 11 years. In all the time I taught the class, Edward was, by far, the best student reporter I ever taught. It’s not even close. He was naturally gifted at the art of making connections with people. He knew how to ask questions and how to approach anyone. He was fearless in forming personal relationships, which is the single biggest problem I have noticed with young reporters. His fearlessness was also part of what made him a great human being. He would call me, text me and or want to meet for lunch if he was in town. He was rare. His death brings me to the edge of tears every time I think about it.”

“Edward made us all better, as journalists and as people. He not only wanted to be friends with everyone he met, he wanted you to feel like you were his only friend in the world. That ability to connect with people, to understand your happiness, your pain, your hopes and even your fears allowed him to tell stories that went deeper than just the Xs and Os on a football field. I am making it my mission to listen more, to be a better friend, to tell compelling stories and to spread the light Edward once spread. Because our world is better with that light in it.”

“Ed was a friend and colleague — we covered the Gators together for different outlets. He was the rare type of person who made you happier every time you saw or talked to him. He was always full of joy, humor and encouragement, and if each of us lives a little more like that each day, the world will undoubtedly be a better place.”