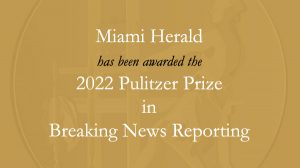 The Miami Herald staffers were lauded for a series of reports that featured urgent yet sweeping coverage of the Surfside condo collapse and for merging clear and compassionate writing with comprehensive news and accountability reporting.

The Pulitzer honor was awarded to the entire newsroom as opposed to a single writer, as 37 journalists were involved in the early reporting. This is the 23rd Pulitzer Prize for the newspaper.

According to the Miami Herald, “In between, photographers captured the enormity of the destruction at Champlain Towers South, one of the deadliest building failures in modern history. Writers painted scenes of narrow escapes from firsthand accounts of those who were able to get out of the portion of the building left standing. And editors and social media specialists shared the information in all media, from the Herald homepage to Instagram. Readers were able to follow news from witnesses to official sources in nearly real time.”

Cox was part of a team that covered the 2021 attack on the U.S. Capitol. The Washington Post won “for its compellingly told and vividly presented account of the assault on Washington on January 6, 2021, providing the public with a thorough and unflinching understanding of one of the nation’s darkest days.” The Pulitzer Prize for Public Service is considered the most prestigious of the Pulitzer awards.