Telecommunication Grad Finds Her Niche and Success in Health Communication

“Find your niche and stay there.”

Kamelya Hinson, B.S. Telecommunication1990, clearly remembers those words from a professor when she was at the University of Florida College of Journalism and Communications. And that’s exactly what she did.

Hinson is a Senior Health Communication Specialist at the U.S. Department of Health and Human Services (HHS). She joined the agency in 2009, after stints in television, radio and film and marketing positions at private and non-profit organizations.

She always knew that she would carve out a career in communications. She just wasn’t sure what that would look like. But she was convinced early on that her education at CJC had more than adequately prepared her for her journey. “When I started in TV, I was nervous, but I quickly realized that everything I had been taught at UF in television production was exactly what was being done at my job,” she said. “My education prepared me for every role I took, and there were no surprises.”

Still, she wanted to stretch her communication muscles and obtain a job that would allow her to use all of her skills. That’s when a fellow UF graduate reached out to the Gator Nation with an opportunity for a health communicator at HHS. “From the minute I started the job, I knew that I had found my niche,” she said.

In her current role, Hinson does everything from public information officer to creating and managing content for social media and websites to teaching crisis and emergency risk communications to state and local health responders. Each of these responsibilities require that she and her team translate complex scientific information into language that anyone on an 8th grade reading level can understand. “It makes no sense to have this information if we can’t share that with the general public in a way that they can understand,” she said.

She has deployed twice by Centers for Disease Control and Prevention (CDC) to support ongoing public health emergency response communication needs. In 2018, Hinson spent three months in U.S. Virgin Islands as Risk Communications Lead for the Hurricane Maria Response.  In 2016, she traveled to American Samoa to help spread the message about Zika virus prevention and its effect on pregnant women. Hinson quickly learned that she would have to tailor her communication methods to meet the cultural needs of the community. “Not everyone on the island is on social media, TV is limited, and we had to reach the community to let them know that free testing was available,” she said. “We had to find creative ways to reach the population.”

Hinson credits her continued success on the relationships built through the Gator Nation. Currently, she is president of the Atlanta Gator Club for the UF Alumni Association and head of communication for the UF Association of Black Alumni in Atlanta. 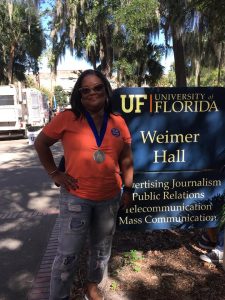 “After graduation, I built relationships and was able to meet other UF graduates. That created a comradery among us,” Hinson explained. “Gator Nation is real. It’s not just something we say, it’s something that we live.  It’s a club of excellence.”

Hinson said she is proud to advise other CJC students on entering the government system. “The relationships and the value of the education I received there made me want to give back,” she said. “I encourage current students to think outside of the box, to consider becoming communication professionals in a corporate, non-profit or government setting. “And once they find their niche, they should always reach back to help young Gator alumni find their place in this world. I found mine, and I’m not going anywhere.” 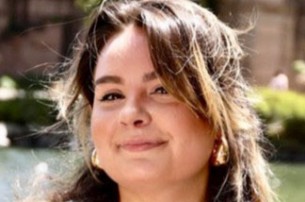