As a child, Morgan Ginn, B.S. Advertising 2018, loved playing dress up and dreamed of creating her own line of clothing. But then her socially conscious twin discovered the fashion industry had some major flaws. Ginn wants to change that, and she’s started her own company in Uganda to champion sustainable fashion and promote education for girls.

When she first left her home in Deltona, Florida, to attend the University of Florida College of Journalism and Communications, Ginn, 23, planned to major in Public Relations but ended up switching to Advertising. “I learned that advertising could be a tool used to raise awareness, promote advocacy and create behavior change,” she said. It could “sell others on why they should care about our world and the people in it. This changed everything for me. “

Twin Megan, a social justice advocate and student at Florida State University, discovered that some in the fashion industry contributed to the destruction of the environment and mistreated garment workers, Ginn said. “I could not believe that something that gave me so much freedom (as a child) was taking away freedom from others. I knew I had to be a part of the movement of using fashion for good.”

She started learning about retail in her first internship. As a freshman, she worked in various departments for the parent company of Winn-Dixie, eventually developing a marketing campaign to get Gainesville students to shop there. In her second internship, she worked in sales and marketing for Krochet Kids intl. in California, a sustainable fashion company founded by three high school friends who wanted to make a difference. They did that by teaching women in Uganda how to crochet, helping them break the cycle of poverty. The following summer, she started her third internship, working in production for Krochet Kids in Uganda. She was hooked.

Interviewing Ginn means learning a new language, one that includes sustainable fashion, “fast” fashion and “slow” fashion.  She says you can’t have sustainability without respecting the planet and the people who make the clothing. “They have to have livable wages and they have to use materials that don’t hurt the environment,” she said. “We have to teach consumers to care more about the quality of an item rather than just buy something for the season, the week, because it’s the cool thing.”

Fast fashion is made by companies that do whatever “they can to put the lowest price tag on the product,” she said. Slow fashion is minimalistic. “It’s pieces you are supposed to love for a long time, quality pieces, very artistic.”

She quickly felt at home in Uganda and decided to return after graduating from UF. There, she’s empowering young women and girls, teaching them about fashion, business and education. She’s using her degree and her company, MODO, which she co-owns with Susan Namirimu, a woman she met in Uganda, to “promote the idea that a girls’ education is important in a culture that primarily puts a heavier emphasis on boys’ education.”

Ginn said the goal for MODO is to build talent and ensure girls have jobs making apparel at a MODO manufacturing facility. The plan now is to turn the day-to-day operations over to her partner when she returns to the United States in a year or two.

She speaks fondly of her time in the CJC. “What I particularly enjoyed about many of my courses is that they were less test-based and more focused on real deliverables like developing a campaign or rebranding a company,” she said.

Advertising Associate Professor Carla Fisher was teaching advertising strategy when Ginn enrolled, only to find out the focus would be on health science. “I almost switched classes because I didn’t think advertising health science sounded as interesting as a more commercial focused ad strategy class. But it was exactly what I needed. It was this class that opened my eyes to the fact that advertising could not only be used for driving business but also social good.”

She launched a blog campaign in college called Not the New Black to change consumers’ behaviors. “It was a time when sustainability was a trendy thing, but that couldn’t be the case for everything. Ethical fashion/sustainability is the new black. Something new and trendy you needed to have. Trends come and go; sustainability is something we should preserve and strive for, not just today but long lasting.”

But life wasn’t always easy in college. During her internship in Uganda she enrolled in an online grammar course that included a five-minute quiz every week. “Trying to take a timed quiz in Uganda was not a smart choice. I almost failed because I couldn’t get my quizzes to load fast enough on the Wi-Fi here. Once I even remember the power going out mid-way through a quiz.”

She also paid her own way through college, relying on scholarships and money she made from two part-time jobs — one at a local coffee shop and the other as an on-campus receptionist. “This was tough and it is one of my proudest achievements,” she said. “It was a balancing act, but I’m grateful because it taught me how to hustle and make my own way. I think it is also why I am so passionate about making a way for girls here in Uganda. I believe that if someone puts their mind to something that they can do it.” 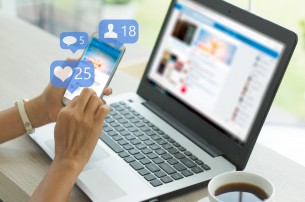