Growing up in Memphis, Tennessee, Kim A. Barton, B.S. Advertising 1985, was no stranger to civic engagement. She watched her parents participating in the political process, all while encouraging others to do the same. She saw them drive friends to the polls and go door-to-door, making sure that neighbors were registered to vote.

Barton was born during the height of the Civil Rights Era — a time when many previously shut doors were being opened to African Americans — but the memory of a racially segregated Jim Crow South was always with her family. Her mother, who still lives in Memphis, was not able to join the Girl Scouts as a child, much less dream to hold elected office.

“A passion for voting is not something new in my adult life. I witnessed that passion in my parents,” Barton said. “This comes full circle for me to be in this position. It makes me smile because I know voting was so important to my mother and my father.”

Barton got her start with a basketball scholarship at Oklahoma’s Connors State College. After being named a First-Team National Junior College Athletic Association (NJCAA) All-American and leading her team to its first NJCAA tournament, she transferred to Oral Roberts University in Tulsa, Oklahoma.

Following an undefeated season — when Oral Roberts University had the distinction of being the only school in the nation with a undefeated season in both men’s and women’s basketball in 1983 — her then coach, Debbie Yow, moved to the University of Florida to be the head coach of the University’s women’s basketball team. Barton followed, playing forward for the Lady Gators while pursuing a degree in advertising.

“It was not easy, but it made me who I am today,” Barton said of her time as a student-athlete.

Barton had intended to pursue marketing at Oral Roberts, but she decided to make the switch to public relations when she got to UF. However, her love of creating and design drew her to the College’s Advertising program.

After graduating in 1985, Barton’s first job was with the Florida Department of Children and Families. She initially worked in a program helping medically needy families, before becoming a screener determining eligibility status for people applying for various assistance programs — not at all related to the work she planned to do as an advertising student.

She later transitioned into a role in the “One Church, One Child” program, which provided adoption-related services in partnership with the Florida Department of Children and Families and places of worship. She recruited black families to adopt children in foster care. Every weekend, Barton took the kids out to do things to help her get to know them better.

“When I found a good home for them, I would get depressed because I would miss them,” Barton said. “It would just hit me like a ton of bricks that they were gone.”

Eventually, she began looking for work that aligned more closely with her degree, and when Beverly Hill was hiring her staff after being elected Supervisor of Elections in 1992, Barton was hired to be the office’s first outreach coordinator.

In that position, Barton worked in the community to educate people on voting and why it was important. She also worked with communities with low voter turnout to learn about why they weren’t voting and find ways to fix it.

She was later promoted to serve as director of outreach. She created educational campaigns and maintained relationships with UF, Santa Fe College and local high schools, among other responsibilities.

Ralph Lowenstein, former CJC dean, was both a former advisor and one of her supporters. During her campaign, she received a personal letter and a campaign donation from him.

“It made me so proud that he even remembered me and thought of me,” Barton recalled. 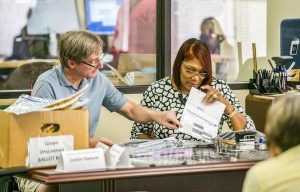 “When I look back at the things I said I wanted to do during my campaign, I can truly say I’ve done everything I said I was going to do with the help of my awesome and dedicated staff,” Barton said.

Recently, the Alachua County Supervisor of Elections won its first national award, the Election Center’s 2019 Stars and Stripes Award. The award was the result of the office’s partnership with the University of Florida during the 2018 midterm elections.

When the U.S. District Court for Northern Florida ruled that a previous statewide ban on early voting on college campuses was unconstitutional, Barton’s office partnered with UF to make it happen, and the University became the first higher-education institution in the state to say it was going to offer early voting. To promote early voting, information was distributed to the UF community through emails and in communal spaces like residence halls and videos were produced with UF President Kent Fuchs.

“We had the highest turnout of voters of any Florida college campus,” Barton said. “We’re just hoping to build on that success for 2020.”

In addition to early voting, her office has made it a priority to build a relationship with the UF community through activities like speaking to campus organizations and participating in National Voter Registration Day.

“I’m so thankful for where I am today being the Supervisor of Elections,” Barton said, adding that “every step along the way” there were people who impacted her life in big and little ways that she will never forget.

Barton has received numerous awards for her work in the community. One that she cherishes most is her 2019 Women Who Make a Difference honor from the Girl Scouts of Gateway Council.

When Barton — a former Girl Scout whose parents made sure she got involved with the organization when a troop started in their community — stepped up to give her speech, the podium was draped in her Brownie and Girl Scout uniforms that her mother, sitting in the crowd that day, had saved. 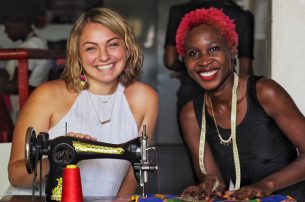 By Lenore Devore, B.S. Journalism 1984  As a child, Morgan Ginn, B.S. Advertising 2018, loved playing dress up and dreamed of creating her own line of... 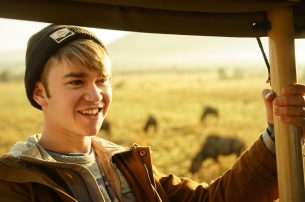