University of Florida College of Journalism and Communications student journalists, alumni and staff from WUFT-TV/FM and Noticias WUFT were honored in the 25th annual Society of Professional Journalists (SPJ) Sunshine State Awards competition. A total of 18 awards were received in both professional and student divisions for work on radio, television, print and online. 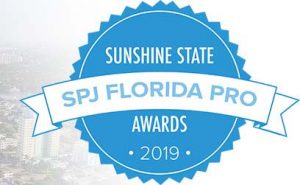