The University of Florida College of Journalism and Communications (UFCJC) has won the 2018-19 Hearst Journalism Awards Intercollegiate Broadcast competition. UFCJC had the highest accumulated points from the radio and television competitions. 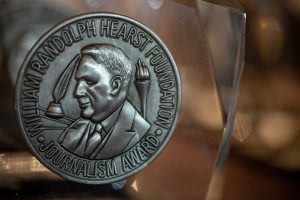 Contributing to the point total was the first-place finish for Telecommunication seniors David Jones in Television News and Grace King in the Television Features category. Jones and King have automatically qualified to compete in the National Championships in San Francisco in June.

In addition, three CJC Telecommunication seniors were honored as semi-finalists. Mary Grace Scully received third place in Television News and Meredith Sheldon and Delores Hinckley won fourth place in the Television Features and Radio categories, respectively. The students will submit additional entries for a semi-final round of judging. Finalists from this round of judging will qualify to compete in the National Championship.