Bernell Tripp, University of Florida, “John Q. Adams’ Western Appeal: Voice of Black Midwesterners in the Midst of Accommodation” ? Several historians have characterized the Boston Riot of 1903 as a catalyst that widened the gap between radicals and accommodationists, while also helping to clearly define the divergent political philosophies for those African Americans who were still unsure. However, while others would begin to question Booker T. Washington’s motives for his conciliatory philosophy, Western Appeal editor John Quincy Adams would stick by Washington in the months following the Boston meeting – or did he? This study examines Adams’ activist stance and protest style before, during, and after the incident in 1903 for changes in his self-proclaimed national voice of African Americans. An examination of this career-changing year in his life would assist in constructing plausible explanations of not only how but also why the Appeal developed a well-respected reputation among Adams’ journalistic peers during this tumultuous period.

This four-person panel made up of former AJHA presidents described important puzzles/mysteries in mass communication history and how the panelists solved them or at least tried to solve them. More broadly, it provided suggestions and guidance about how historical research can use a variety of records and documents, combined with informed deduction, to attempt to get answers to questions that historians have.

My presentation dealt with the mystery of Founding Father Alexander Hamilton supposedly being the father of a well-known African-American activist in New York during the early 19th century. Although the rumor is often repeated, there has been no evidence to support the claim that noted abolitionist William Hamilton was actually Alexander Hamilton’s son.

Ronald R. Rodgers, University of Florida, “The Mission vs. The Market: The Dialectic of Press Reform in the Age of a Commercialized Press” ? The mission vs. the market was a dialectic that animated much of the criticism of the ethics of the newspaper a century and more ago as it sloughed off partisanship and redefined its role as a commercial enterprise. From that dialectic this paper draws out the foundational precepts of the mission of journalism – which are applicable to the current conversation in a similarly disruptive era about creating a new news ethic for the digital age. 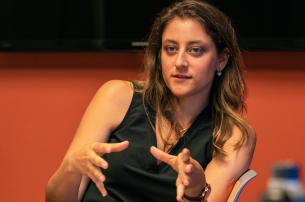 Sara Ganim, University of Florida College of Journalism and Communications (UFCJC) Brechner Center Hearst Journalism Fellow, has been selected as one of four distinguished journalists...

The Center for Public Interest Communications at the University of Florida College of Journalism and Communications on April 23, 2021 was mentioned in the White...