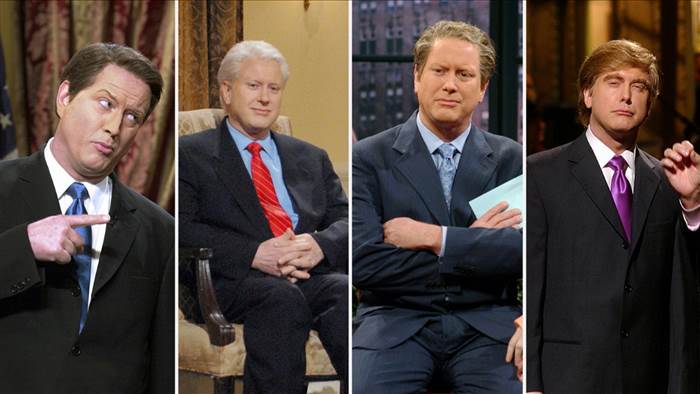 Darrell Clayton Hammond, B.S. Advertising 1978, used to perform impressions at home because it made his mother happy. He’d perform for students at a bar in Gainesville, often making them laugh. But the biggest gig of his life was a 14-year stint as a regular cast member on “Saturday Night Live,” where he impersonated Bill Clinton, George Bush, Donald Trump and more than a hundred others.

He has worked at radio stations, performed at major events in Washington, D.C., (including the White House Correspondent’s Dinner), acted in several TV series and written a book — “God, If You’re Not UP there, I’m F*cked”, which he turned into a one-man show. Now, the 62-year-old Melbourne, Fla., native is the announcer for SNL. He credits much of his stage life to UF Theater Professor David Shelton. But it was a professor in the College of Journalism and Communications whom Hammond admires most.

“I took a journalism course with a law professor named Jo Anne Smith that ultimately inspired me in a lot of different ways,” says Hammond. “It was my first class that I’d ever attended faithfully and passionately in my whole time in high school or college.”

Hammond had a tough upbringing, suffering abuse at the hands of his mother while his father, a World War II veteran with psychological issues, numbed himself with the bottle. From his father, though, he found a passion for football, which would help him fit in at college. He also developed an interest in performing early on.

“When I was 7 or 8, 9 years old, I discovered that if you walked into a room and started talking like someone that was in that room, that you could enthrall people, and it was a ticket, it was a way, it connected me with the world that I … had no way of connecting with.”

Coming from an “uneducated lot,” Hammond says he didn’t do well in school, so he first attended junior college, where he received an associate’s degree. “The grades were good enough and I had done a lot of freelance work for radio stations in the Melbourne area, and all those things put together, I got admitted to the School of Advertising in the College Journalism.”

“The idea that somehow someone from our family tree would go to the University of God Damn Florida was impossible.”

As a middle and high school student with a learning disability in math, Hammond struggled. “There was a teacher that made fun of me and it scarred me so badly I just sort of began moving through life believing to the marrow of my bones that I wasn’t smart. In fact, I was stupid, and I believed it.”

When he started taking Smith’s media law class, he was taking three antidepressants, and described himself as “zombified.” He was on academic probation and in jeopardy of being kicked out of UF.

Smith knew about his learning disability. “I was so impressed by her,” he says. “She was a huge deal and she took extra time with me, and I don’t recall a teacher ever doing that in my life, and I responded. I discovered through her that I could get turned on by language.”

“She treated me as if I were intelligent,” he says, which made him think he was. “This teacher just gave me confidence for life.”

He found focus in her class, putting his mental problems on hold, he says. “I was a great student for her.  … During her course, I stopped taking antidepressants and I stopped drinking just so I could study those words.” In such a tough class, being able to retain a lot of information quickly is critical, and Hammond says he learned later in life — when he started working for Lorne Michaels at “Saturday Night Live” — that he was gifted with that skill. “I discovered I had this ability, a lot of abilities, I didn’t even really know I had.”

Another influential teacher was David Shelton in the Theater Department, who inspired Hammond to perform.

“I had lots of speech problems because of the mental problems I was having. So here’s this other professor who’s saying, ‘Hey, bring truth, bring truth, just bring truth. It doesn’t matter how you talk.’ And you know, I did a play there called ‘When You Comin’ Back, Red Ryder?’ and he coached me right through it, this kid who’d been told he couldn’t talk. It got great reviews and inspired me to go to New York City, where I got cast in seven plays between the ages of 21 and 25. So, there was always that, you know.”

He recalls taking an independent study course to study charisma. “I wanted to study the top network news anchors and see why their powers of communication are so great.”

There he found that some of the greatest communicators in the world — from Winston Churchill and John F. Kennedy to Walter Cronkite and Ronald Reagan — failed Oral Interpretation, just as he had. “They all put commas in illogical places. I discovered they were doing what Professor Shelton had told me to do. They were being utterly themselves,” he says. “Their speech was not perfect.”

“Being utterly yourself will captivate your audience,” he says he learned. “So all of a sudden, I’m like, ‘Yeah I don’t speak very well,’ … and I did have a problem talking. But it gave me hope that one day I could learn how to bring truth and be utterly myself. … These are just general thought enterprises that encouraged me, like, ‘Hey, I can go forward with my life.’ ”

“There were things that happened in Gainesville which propelled me to the next level of learning in my life,” he says. “So I always felt like every five years, every 10 years, I was having to learn some new skill, but before I could do that, I needed a basic foundation. And that was, ‘Hey, I am intelligent. Hey, I do have abilities.’ ”

I don’t want to make too big a deal over my personal struggles at the time because the truth is … there was some great experiences that I’d never had in my life before,” Hammond says. “I wish I would’ve arrived in better shape so I could’ve enjoyed my time there better, but the last couple years when I was on academic probation and I stopped partying and started studying and working with this professor, you know what? I ended up having a really good two years. Still drank beer a lot, but not so much.”