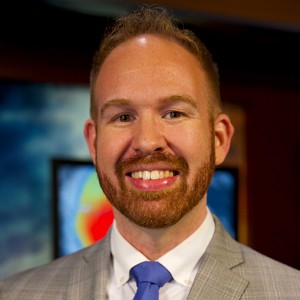 Meteorologist Ray Hawthorne joins WUFT from Madison, Wisconsin, but he’s very familiar with Florida weather. Ray grew up in Southern New Jersey, then first moved to Florida in 2003, where he earned his Bachelor of Science degree in meteorology from Florida State University. He was an on-air meteorologist for WCTV in Tallahassee for 4 years, where he enjoyed toying around with the graphics systems and set up his own weather model that he ran locally. That led him to Wisconsin to work for Weather Central and Weather Services International (owned by The Weather Channel) where he trained, installed, and managed weather graphics systems used by nearly 280 television stations across the United States. After a 3-year stint in healthcare IT, he has returned to Florida to pursue his love of the weather, a warmer climate, and the technologies that distribute it to millions of people. Ray is also a programmer, and has familiarity with a several programming languages that will be used to build digital products for the Florida Public Radio Emergency Network and South Carolina Emergency Information Network. In his spare time, he enjoys running, hiking, reading, watching his beloved Philadelphia Eagles, Philadelphia Phillies, and Florida State football games, and occasionally traveling, too.