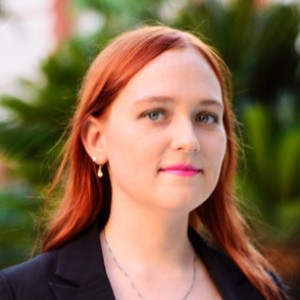 Dr. Athena Masson is a leading hurricane expert and meteorologist originally from Florida. Since surviving Hurricane Andrew in 1992 she has dedicated her life to studying tropical cyclones and other severe weather phenomenon. She knew from a young age that she wanted to be a broadcast meteorologist.

Dr. Masson has studied in several countries during her undergraduate years including Antarctica where she delivered the opening speech for the 2007 International Polar Year transmitted via satellite. While working towards her Bachelor of Science degree she received a certificat de langue française from la Sorbonne Université in Paris, France. She completed her undergraduate degree at the University of San Francisco.

She immediately began her graduate research at a place where tropical cyclones end: Newfoundland, Canada. Dr. Masson, at Memorial University of Newfoundland, was tasked with researching the dynamics of hurricanes at the end of their life cycle in the far North Atlantic, resulting in her thesis, “Extratropical Transitions in the North Atlantic with Special Reference to Hurricane Igor.” She graduated as a Fellow of the School of Graduate Studies and received her Master of Science degree in 2013.

Dr. Masson continued her meteorological education and was given a full research scholarship to attend the University of Toronto. While teaching meteorological, climatological and environmental science classes, she focused on her PhD dissertation – creating a new hurricane scale for the North Atlantic that better classifies the strength of an approaching tropical cyclone as compared to the Saffir-Simpson Hurricane Wind Scale.

She became one of Canada’s leading hurricane experts in 2016 when Hurricane Matthew heavily impacted her home in northeast Florida where she was residing while researching and writing her dissertation. She was featured on CTV, CBC radio, and Global News Network around the clock describing the effects of the hurricane and providing in-depth analyses on the first major hurricane to threaten the state in a decade. Hurricane Matthew was the start of what would become a regular occurrence. Since then she has reported on the hurricanes Harvey, Irma, Maria, Dorian, and most recently Laura and Zeta, to name just a few. She has also provided commentary on other severe weather events such as the extreme winds at the Winter Olympic Games in Pyeongchang, South Korea, and the 2018 Tornado Outbreak in Canada. She is a featured storm expert in the TV documentary series “The Weather Files.” In 2018 she successfully defended her thesis entitled, “The Development of a New and Improved Hurricane Scale for the North Atlantic.” Her hurricane scale is known and recognized as the Masson–Gough Hurricane Scale. She earned her Doctorate in November of 2018.

Dr. Masson started her broadcast carrier as a Meteorologist and Digital Content Producer in San Angelo, Texas before moving back home to Florida and working at WUFT as a Meteorologist. She keeps close ties to the academic community, continuing to research and publish articles as well as attend and present her research at conferences. She owns and runs a trademarked company under the name “Weather Goddess®” where she blogs, reports and researches weather and climatological phenomenon around the world.